Throop Company Has Produced Specialty Concrete All Over the United States

We have the mobile batch plant equipment and over 35 years of experience as Rapid Set Concrete Producers. We were the FIRST approved Fast Setting Rapid Set concrete producers on the west coast.

We are a specialty ready-mix concrete producer specializing in cellular foam concrete. 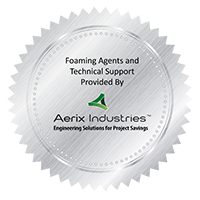 The Throop Company has worked on almost every freeway or highway in southern California from San Diego, Santa Ana, Los Angeles, Pasadena, and Santa Monica (just to name a few). We have poured Rapid Set concrete and Type II cement in places like Las Vegas, Lost Hills, King City, the San Francisco Bay Area, Sacramento, in Nevada, Oklahoma, Illinois, New York, the state of Washington and many other cities and states.

We work under general contractors who coordinates the cutting and removal of the damaged slabs, prepares the areas for the concrete, and performs the placing, finishing, and curing of the concrete. The Throop Company is primarily involved with producing concrete; but we know and understand the process of the freeway panel replacement operation and concrete placement so well that we can help the general contractor with recommendations and suggestions.