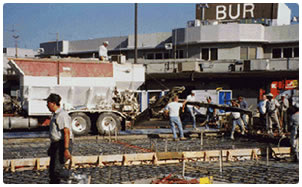 Airport taxiways are the link between the airport runway and different areas of the airport. Most airport taxiways get heavy use, especially in busy airports. After years of supporting the weight of massive airplanes, the concrete in taxiways needs to be replaced to reduce runway incursions and improve surface navigation. At the airports listed below, different contractors were used to remove the existing concrete and to prepare the area for Rapid Set® concrete placement.

After the Rapid Set was placed by the George L. Throop Company, various contractors performed the placing, finishing, and curing. The taxiways were returned to service within a few hours of placement. We completed each of our airport taxiway repair projects on time.

NOTE:
Work was performed at the following airports where the Throop Company worked as a sub-contractor under a general contractor: