Southwest Products, Inc., in Irwindale, CA, was a part of a whistleblower case where hazardous waste including waste cutting oils and solvents was allegedly sprayed through a sprinkler system onto the dirt lot south of their building on their neighbor’s property. In September, 1994, the property owner signed a Voluntary Cleanup Agreement (Docket No. HAS 97/98-036) with the State of California, Environmental Protection Agency, Department of Toxic Substances Control (DTSC). The Department of Toxic Substances Control supervised and approved all cleanup activities at the polluted site.

An assessment of the contaminated and polluted area was conducted under the Department of Toxic Substances Control and bench scale tests were conducted. The bench scale testing results indicated that Type II cement from California Portland cement would be the best medium to treat the contaminated material. The George L. Throop Co. was retained and mobilized a Waste Operations and Emergency Response crew within 40 hours of notification that was trained with using a mobile concrete batch volumetric mixing unit at the site.

Portland Cement with the contaminated soil and materials were blended and calibrated in the mobile concrete batch plant mixing unit, one ingredient at a time using a portable digital platform scale and super sacks (3000 lb. batches). Water was also added and calibrated per mix design using 275 gallon totes. All the excavated and contaminated material was removed until the native material was tested free of contaminants so that they were above the project action levels. All excavated material was segregated using a Read Screen All to a 1.5″ minus and the optimal treatment recipe used had a 20% cement admixture. 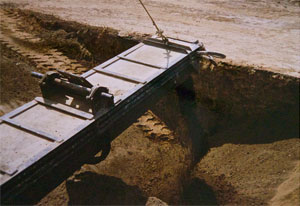 Soil samples were taken off site to be tested in the laboratory to verify the treated material passed the Department of Toxic Substances Control required action levels. Initial run batch samples passed and production continued in batches as the contaminated materials were excavated by the contractor. Production materials were segregated in separate stockpiles and sampled every shift. Laboratory analytical test results documented successful mitigation of the soil contamination using the cement mixture and George L. Throop’s mobile concrete batch volumetric mixing equipment. The treated materials were placed back in the excavated areas and re-compacted. All treated materials met the Department of Toxic Substances Control’s requirements and the soil remediation project was completed under budget, on schedule and with no injuries.

Learn more about our other soil remediation projects: