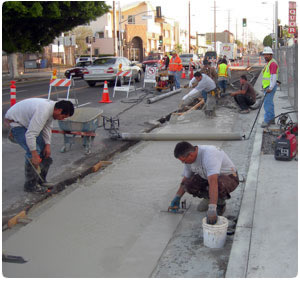 The Throop Company has produced concrete for city, county and government agencies such as Environmental Services, Water and Sewer, and Transportation departments all over the United States.

For city, county and municipal transportation departments, intersections are the most susceptible areas to pavement deterioration. Heavy vehicles stopping and turning can damage pavement surface severely, especially along the approaches to intersections. The pavement within the junction of an intersection also receives twice the traffic of the pavement on the approach legs. Bus pads are especially susceptible to distress occurring not only because of the weight of the buses but also because of the damage resulting from turning and stopping on flexible pavements.

The truth is concrete pavements are well-suited to handle the heavy, channel-creating traffic and turning movements of vehicles. Concrete does not rut, washboard, or shove, which makes it a safer and a more durable pavement surface. In the long run, concrete is actually less expensive for cities because of its longevity. The Throop Company has replaced numerous bus pads and other concrete placements for many cities and other municipal government agencies. 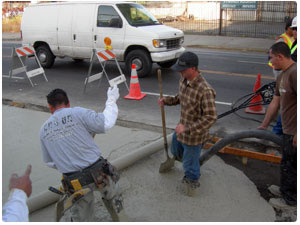 Because Rapid Set® Concrete can be driven on in less than 2 hours, usually in one hour actually, it is more efficient for city streets because traffic does not have to be interrupted and lanes do not have to be closed for days on end. 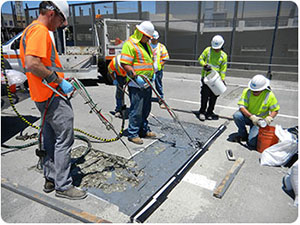 Contact the George L. Throop Company to find out more about how we can help with your city concrete project.