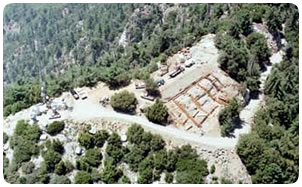 The following project description is an example of a remote mountain-area that was a challenging project the George L. Throop Company completed on time and within budget.

The photo on the left shows the beginning stage of the 10,000 sq ft building foundation. Please note the slope of the forms on the hill. Lower forms were 35 feet below the level of the concrete production site. It was a challenge we were able to handle.

In the summer of 2000, we were hired to be the ready-mix producer for a very remote and mountainous construction job. Because of its remote location, using regular ready-mix truck transportation was not feasible; they would be unable to drive the small windy road. From the City of La Canada, it takes about 1.5 hours to reach the construction site, part of which had very mountainous roads. The job was to construct a new 200 ft. communications tower with broadcasting and wireless technology capabilities for the Lodestar Towers company. In addition to the tower, a 10,000 sq. ft., two story concrete building, was required to be built. Due to the remote construction site, extensive excavation and structural design was required which the Throop Company participated in. Some of the challenges included significant coordination among the different organizations including updating and reinforcing the road in order to move equipment in and out.

There were various mix designs that were required for the job. One concrete mix design included a shrinkage compensating admixture, called Tetraguard by Masterbuilders. Because of the addition of Tetraguard, we were able to use 3/8″ rock as coarse aggregate for the foundation, flatwork, and roof slab. Shrinkage tests were comparable to using 1″ rock. Tetraguard allowed the placement to take place with a 2.5″ hose whereas it would normally have taken a 4″ concrete pump hose. A boom pump could not be utilized because of lack of access. Our on-site concrete plant, though, was able to produced over a total of 1,000 cubic yards. The various concrete mix designs we produced included masonry grout, shotcrete, flowable fill, and shrinkage compensating concrete.

The photo to the right is a view of the concrete being produced and placed for the communications tower foundation. Note that the building foundation is complete – ready for concrete block. Also note the yellow skiploader loading mixing plant (center of photo). White supersacks containing concrete mix materials also were used to form bunker for bulk sand. Our concrete mixing plant was able to produced 30 cubic yards per hour.

The George L. Throop Company was able to complete the project on time and within budget.