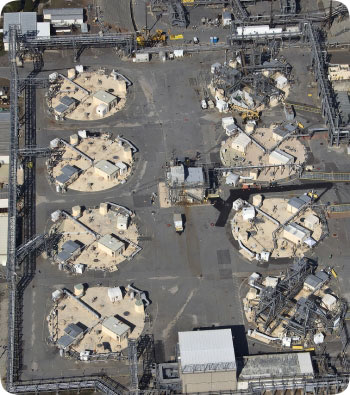 In 1997 the Throop Company was hired by the United States Department of Energy, Savannah River Site in Aiken, South Carolina to do the first ever Nuclear Waste Tank Closure in the United States.

This historical project involved the first closure of high level waste tanks. These contaminated tanks were 85 feet in diameter and 35 feet high and held 1.3 million gallons of waste. Over 8,000 cubic yards were needed to fill each tank. Each tank used four different concrete mix designs. One concrete mix had eight ingredients, another concrete mix design used over 13 sacks of cement per yard, and yet another mix design was dry powder and was placed pneumatically. 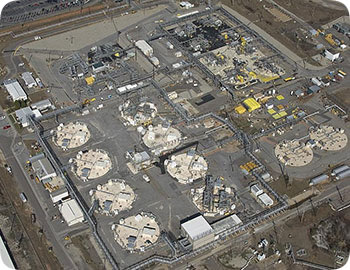 All mixes were pumped over 1200′ to the tanks being filled. A special procedure was developed to clean and maintain the slick line. Production varied from 18-90 cubic yards per hour depending on mix design and application.

The Savannah River Site is home to the first ever two liquid radioactive waste tank operational closures in the nation. These two closures marked a major milestone in stabilizing another portion of Cold War legacy materials for the site and the country.

Tank 20, the first closed, was certified closed by the South Carolina Department of Health and Environmental Control (SCDHEC) and applicable DOE Orders in July 1997. SCDHEC certified closure of Tank 17 in December 1997. Both tanks were constructed in 1958 and first used in 1960.

Use of Tank 20 and Tank 17 was no longer required to support tank farm operations. The U.S. Department of Energy, SCDHEC, the U.S. Environmental Protection Agency, Savannah River Site workers and the public worked closely together to establish strict closure requirements that support all state and federal regulations. 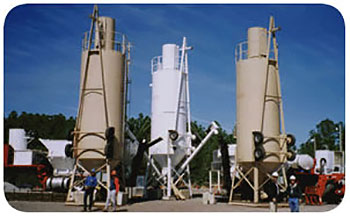 Closure activities began years before the actual closing of the tanks. First, contaminated waste and sludge was removed from the tank to the extent practical, while finalizing agreements and closure plans with state and federal regulators. Once these steps were completed, the closure activities began with the George L. Throop company pouring specially formulated grout, a cement-like substance, into the 1.3 million-gallon tanks. First, a special grout was added to retard the leaching and migration of the waste. Over the course of several weeks, the tanks were filled with controlled low strength material (a cement-like backfill) to within a few feet of the top. Then the balance of the empty tanks was filled with very high strength cement.

This nuclear waste tank closure effort reduces risks to human health and the environment by stabilizing residual waste in the tanks, which minimizes the potential for groundwater contamination. 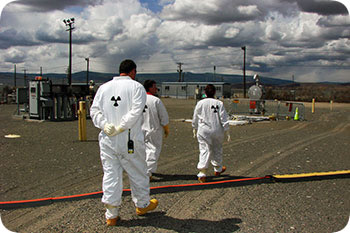 To reach the tank closure goals, workers had to build, test and deploy new technology and tools to remove waste from the tanks. In addition, the Throop Company helped to formulate the special grout used for testing and contributed to finally determine how to best pour the grout into the tanks in order to stabilize the remaining waste and the tank structure.

The two closed tanks are part of the 51 underground tanks used in the Savannah River Site’s F and H Area Tank Farms to hold liquid radioactive waste generated from weapons material production during the Cold War. This radioactive waste from the tank farms has been concentrated over the years to reduce its volume and is currently stored as 36 million gallons in 49 underground carbon-steel waste tanks. The most intensely radioactive waste is being sent to the site’s Defense Waste Processing Facility, where it is being immobilized in glass for safe storage.

Production on-site had numerous advantages. Virtually no waste was created. We had complete control of the production, and 1/3 fewer truck trips were needed compared to using ready-mix style trucks. Our style of equipment handled these unusual concrete mixes well. Another benefit of using mobile batch plants was that our cleanup was a fraction of what 50-70 ready mix trucks would have created each day.

All milestones and deadlines were met including no lost time injuries. The George L. Throop Co. brought much added value to this project.

Westinghouse Decontamination and Decommissioning encouraged the hiring and training of local personnel. Within this environment of changing personnel and temporary employees, the George L. Throop Company had only one “key person” from California for over 50% of the project and was able to coordinate and instruct the personnel to help complete the project on time and under budget.