Throop Cellular Concrete: A Unique Foundation for a New LaGuardia 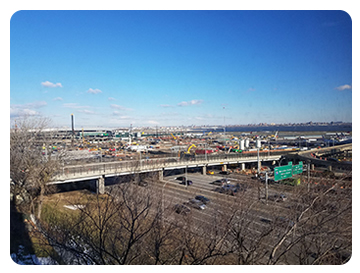 Imagine working on a construction project that is 1.3 million square feet, in the middle of a busy, urban 680-acre site. As you produce and pump the low strength concrete fill that covers so many acres you’re surrounded by at least nine giant cranes, over ten pile drivers, and all the machinery other trades are using to construct eight miles of roadway, build 20 bridges, drive over 7,000 piles and erect 40,000 tons of steel. There are 40 superintendents keeping an eagle eye on several hundred workers. Each area team, with dozens of project managers representing every trade involved, meets at 6:30 every morning to define what’s going to get built and where, hazards to watch out for — and to figure out how to safely work around, or even on top of everyone else. Hours of worker safety programs are a must here.

Welcome to the new Central Terminal B (CTB), now under construction at LaGuardia Airport – and – as Jeff Throop calls it, “construction on steroids.” This first phase of the project for an entirely new and vastly improved LaGuardia Airport will cost $4.2 billion and is financed through what many consider to be the largest public-private partnership for infrastructure in the United States. It is one of the largest construction projects in the U.S. and is a joint venture by Skanska and Walsh Construction. While construction for CTB is underway, the other LaGuardia terminals remain operational for all of its business. Between January and June 2017 alone, LaGuardia continued to serve more than 14 million passengers, whose constant presence added to the construction buzz.

A key objective early on in this massive project was to determine the best possible fill material that would cover the entire area blocking out water from the river it is adjacent to and protect and backfill three miles of trenches laid for the 14 different utilities — all essential for LaGuardia to operate in the 21st century. The trenches house conduits for natural gas, electricity, central heating and refrigeration, water, a sewer system, a photovoltaic system, airfield lighting vaults, fuel pipes that lead to gate hydrants, various kinds of telecommunications — and more. 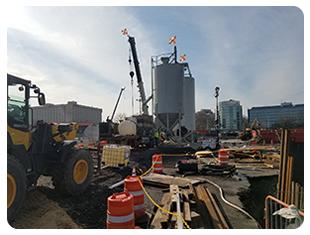 The construction joint venture was looking for a company that could quickly produce and pump large volumes of cellular concrete at the job site — with an operation flexible enough to accommodate the construction project’s daily schedule and location changes on the fly. Averaging between six and seven feet thick, the low strength concrete (LSCF) fill would serve as the foundation for a good part of the 1.3 million square feet of CTB — as well as housing trenches for the terminal utilities. It needed to be easily “diggable” (whatever it covers can be easily excavated) in case any piece of the infrastructure needed repair. With the LSCF having a characteristic of being almost self-leveling the material was also used to abandon existing utilities.

Tapped on the Shoulder by a Giant 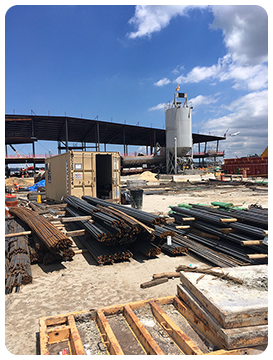 Throop has been well-known for its rapid-set concrete projects at airports like Hartsfield-Jackson Atlanta International Airport and interstate highways, where work needed to be completed overnight — and where good planning by a fast-moving, well-organized operation was essential. The company had recently been branching out into work with other products, one of which was of special interest to LaGuardia — cellular concrete. This mixture of cement, water and pre-formed foam (surfactant), that looks like shaving cream, can be carefully crafted to specific densities, and piped into any void. It is both watertight and non-shrink.

“We presented our method for working with cellular concrete to the head estimator of the project as well as those in charge of all civil scopes of work for the entire project,” says Jeff, “We showed how we could provide substantial savings in both time and money.”

Skanksa and Walsh liked what they saw and offered Throop the project. Throop’s first major hurdle came within seconds of accepting the offer. “They asked us to begin work in three weeks,” he says.

Scrambling to mobilize equipment and workers and to source raw materials in New York, Throop, whose company is based in Pasadena California, arrived on Long Island a few days in advance of starting work onsite — just in time for a trial production, pumping, placing and diggability test on a remote property. After allowing the test to “cure” for a few days, the contractor dug into it with a backhoe, which worked beautifully. Throop’s custom mix of cellular concrete designed especially for the LaGuardia job, passed the test and construction began in earnest. 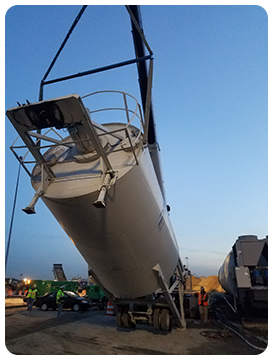 The soil quality under LaGuardia is mixed. Most of the airport is constructed on reclaimed land from the adjacent Flushing and Bowery Bays and consists of what an environmental report calls, “incinerated refuse and miscellaneous fill over the tidal mud flats of a deep deposit of soft organic clay and silt deposit.”

“Existing conditions varied quite a bit,” says Throop. “The worst we observed was a black smelly decomposing soil.”

Located between Flushing and Bowery Bays, LaGuardia is also susceptible to storm surge. On October 29, 2012, about 100 million gallons of seawater surge from Superstorm Sandy flooded the airport and shut operations down for two days, affecting 250,000 passengers. The flooding caused an estimated economic loss to the region of about $108 million. The civil engineers on the project were adamant that the airport’s critical infrastructure had to be more elevated and protected in watertight trenches.

The Magic of Cellular Concrete

Cellular concrete was invented in the mid-20th century and was at first used mostly for flooring and roofing. It can be mixed for densities between 27 and 110 pounds per cubic foot. As the many practical properties of cellular concrete were discovered and confirmed, uses for this product have now expanded into building structure over the last few decades. An additional bonus is that cellular concrete is green; it constantly absorbs carbon from the atmosphere.

The civil engineers for the LaGuardia airport project realized cellular concrete suited their requirements perfectly. Its greater bearing capacity is perfect for areas with poor soil for several reasons. Its lighter weight (the density used at LaGuardia airport was 70 pounds per cubic foot — on the high side for this material), in contrast to traditional concrete (at 150 pounds per cubic foot) resolves settlement challenges better. It is both waterproof, diggable, and less expensive than other options.

“It’s non-shrink, so it doesn’t crack to allow water in; it bonds to itself and it’s just a great product for this application,” says Throop. “It creates a reliable pad in which we can put in all the utilities, and offers great support for all the structures that will go on top.” The contractor used the area just placed for storage of equipment and materials.

Cellular concrete production equipment is usually custom-made and Throop says that the ability to mix the ingredients well, achieve a certain density consistently and produce quantities quickly is both a science and an art. Both would be put to the test at LaGuardia airport, the site that personifies “construction on steroids.”

Navigating the Bumps in the Road 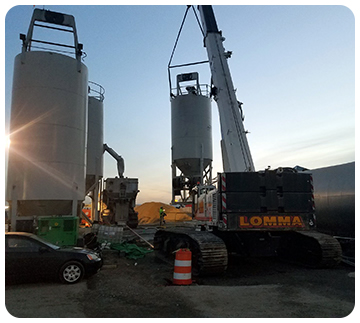 Skanska’s and Walsh Construction’s contract with La Guardia airport specifies the liquidated damages for missing the completion date as $400,000 each day, barring, of course, days where weather or safety issues made it impossible to work. Consequently, Throop faced some pressures to stay on a strict work schedule, even while meeting higher production requests on the fly or speeding up production to compensate for a slowed timetable.

Skanska/Walsh, the contractor Throop worked for, managed all the excavation, preparation, forming, and placement of the cellular concrete, one section (or “cell”) at a time. Immediately after they formed up a “cell”, Throop would produce and pump the necessary amount of cellular concrete — whether the cell called for 500 cubic yards or 2,000. Throop’s LaGuardia operation was capable of producing more than 200 cubic yards per hour (the average full-size barrel truck holds 10 cubic yards). Another benefit of producing on site was the reduction in truck trips normally required. Both creating foam and using water onsite reduced truck trips by more then 50 percent.

“Whatever they were able to form, we’d take care of that day,” says Throop. “We had redundant and backup equipment that covered any situation that came up.”

Throop proved to the construction firm that they could produce at high volume, helping the contractor gain actual days in their schedule. Their timing and the location of their trucks and equipment, however, needed to be flexible as well; sometimes the strict work schedule would change in a matter of hours.

For example, it wasn’t unusual for the contractor to find many pre-existing utilities (some dated back to the first airport in built 1939) that were not on any as built drawings. In each case, LaGuardia and the contractors had to assess whether to abandon it or keep it—all while taking into account routing all the new 14 different utilities.

“They could tell us, ‘We want you ready to produce at 8 a.m.,’ so we arrive at 7 a.m., get everything ready to go and then the designated start might move to 10 or 11,” says Throop “We might finally start producing at 11:30, but the point is that flexibility in how much we could produce quickly, combined with quality control and assurance, resulted in efficiencies that helped the entire project’s bottom line.”

Throop also needed flexibility with changing locations quickly—moving trucks and equipment between as many as three locations in a day across CBT’s vast construction site—and producing whatever was required there. Keeping to a strict work schedule and going above and beyond as needed to meet higher production requests on the fly is all based on having enough materials to do so.

“When you’re bringing in materials just-in-time, and they increase the volume of what they said they were going to pour that day by 50 percent, it can be tough, but we always met the demand,” says Throop. “The secret sauce for our success was building good communication and close relationships with suppliers—understanding the goals of everybody in the supply chain and helping them to achieve them, just as much as they were helping us.

The Importance of Quality Assurance and Control

The company worked with the civil engineers for the Port Authority, (owners of LaGuardia Airport) those of Skanska and Walsh and also its foam supplier to determine what the cellular concrete’s density should be and why — and developed the testing protocols to be used on site.

“We think it’s it critical to be integrated into the planning stage and especially with quality assurance on this kind of project, “says Throop. “Our foresight and our quality control helped solve their day-to-day challenges.”

On average, Throop and a third party testing lab tested and recorded density every 15-to-20 minutes.

Throop believes it was a combination of things that made the project a success: flexible responses to changing customer needs; the ability to customize the equipment used and building strong team relationships along the chain. But he says it all comes back to a deep understanding of how to manipulate the amazing properties of cellular concrete. Located in Queens, New York, Citi Field, which replaced Shea Stadium in 2009, is another example of a huge project that recently used cellular concrete as its foundation — in that case, 30,000 cubic yards of it.

“In my opinion, cellular concrete is one of the best kept secrets that fixes bad soil issues and holds out water,” says Throop. “By using this material, someone who owns land with bad soil can turn it into a buildable property that has changed significantly in value. They’ll have the equivalent of really good native soil they can construct and develop.”

“We all need a foundation to build on,” he says.