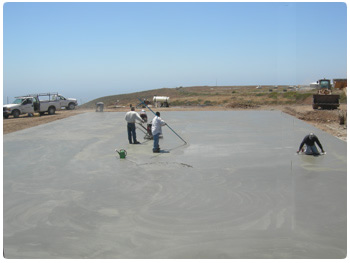 The George L. Throop Company has worked on many different islands producing specialty concrete with specific mix designs in remote areas. We have produced large amounts of custom concrete construction in addition to producing concrete using Type II Portland cement on islands and in marine areas. We have many years of experience dealing with all of the unique challenges when trying to produce high quality concrete in an isolated environment.

The following are examples of different concrete producing jobs completed by the George L. Throop Company on Islands: 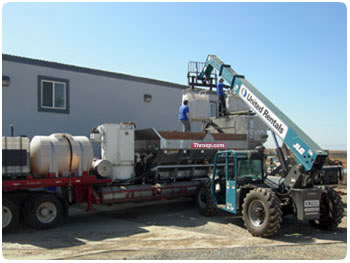 Eleven buildings were entailed in the first phase of this project. Over 4,000 cubic yards are involved between the footings, slabs, grout, and the site work. Barge logistics of loading and unloading at a rate of 400 tons per hour was critical. Overtime on the barge was $550.00 per hour. All concrete and grout was pumped up to 700 lineal feet. A similar scenario to Hawaii (see below) was utilized for placing concrete and grout using a trailer pump and a boom pump. Logistics of working on an island are unique and require extensive planning and communication which is standard procedure for the Throop Company.

At 4000-ft. elevation on the big island of Hawaii, a 400 cubic yard continuous concrete pour was specified. The road to the site was only one lane and took 45 minutes to reach the top. Two-way radio communication was required to coordinate our activities as well as deal with existing operations. Resnik Construction hired the George L. Throop Company to mobilize and coordinate materials to the top of the mountain. All 16-2″ anchor bolts, four per column in each corner of the 48 ft. by 48 ft. by 5 ft. thick foundation, had to stay within 1/16″ tolerance in all directions, some over 60 ft. away. A surveyor was on-site during the concrete pour to make sure the tolerance was never exceeded. Temperature probes were used to monitor the center and surface of the 5-ft. thick foundation. Steps were taken to insulate the top of the slab to minimize temperature change. A trailer-mounted concrete pump and a boom pump were used to place all the concrete material. The trailer pump used the delivery system of the boom pump to place the concrete. All existing activities in progress had to be maintained during construction. Often we worked while in a cloud with little visibility. We were on time in completing this project.

The George L. Throop Company has been called upon and continues to be hired by the U.S. Navy to produce either Rapid Set or Type II Portland Cement on an island off of California, for many applications.