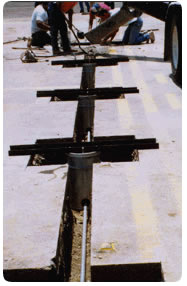 FAA requires over time for airports to upgrade their lighting systems for aircraft runways in order to meet national standards. At the airports listed below, the George L. Throop Company was hired to produce Rapid Set® fast setting concrete to backfill the trench after the new lights were put in place. Using Rapid Set cement allows aircraft to use the runway or taxiway two hours after the quick-setting concrete has been placed. Quite often black oxide color is mixed in to match if there is existing asphalt. Because of our expertise and that Rapid Set concrete comes to strength so quickly, the projects were done quickly and allowed the airports listed below to open back up to traffic within record time.

This work was performed at the following airports: