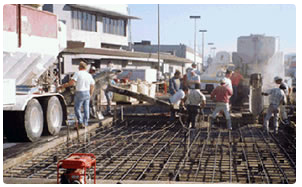 Rapid Set® concrete was produced on-site by the George L. Throop Company at each of the airports listed below. Different contractors were used to remove the existing asphalt and/or concrete and to prepare the area for Rapid Set concrete placement. After the Rapid Set concrete was placed, contractors performed the placing, finishing and curing. The hardstands were returned to service within a few hours of placement because of the quick-setting properties of Rapid Set cement. We completed each of our airport repair projects on time.

Airport Hardstands were replaced at the following airports where the Throop Company worked as a sub-contractor under a general contractor: