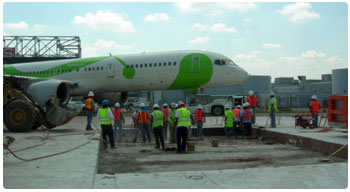 In Atlanta, working under Kiewit, the prime contractor, the George L. Throop Company was able to step into a project where the previous sub-contractor had been dismissed. When the Throop Company started working on the Atlanta Airport project, they were able to double the concrete production. 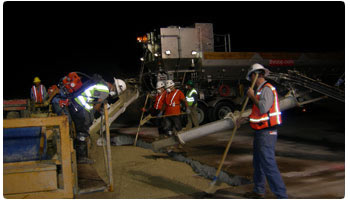 The George L. Throop Company used its fleet of volumetric concrete batch plants to place Rapid Set® concrete at the Hartsfield-Jackson Atlanta International Airport (ATL) for its runway full panel replacement project. Working with Kiewit, Throop was able to double the production of the previous contractor. “We brought our experience to the table, and with Kiewit doing its due diligence, we doubled what anybody had been able to do,” Throop said. “The airport was happy and we got out a lot quicker, in fact, in half the time. So it was a win-win situation.” Read more about the Atlanta International Airport runway panel repair construction project.

Below is a partial list of airports where we have performed airport runway repair or replacement concrete production using Rapid Set®: